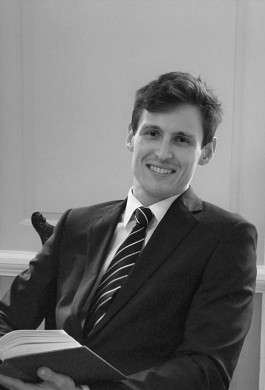 Edward specialises in intellectual property law and disputes with a scientific or technical element. He is regularly instructed as a junior in high value disputes in the High Court, led both by senior counsel from Hogarth and also from other chambers. In relation to lower value disputes, particularly those in the IPEC, he often acts without a leader.

Prior to joining Chambers Edward was an associate in the IP litigation team at Hogan Lovells, so he understands well what clients want from counsel. He also knows the value to clients of pragmatic advice, having spent time seconded in-house to the pharmaceutical company Merck Sharp & Dohme.

Edward has a first class degree in Natural Sciences from the University of Cambridge (ranking 3 of 143 in his class in Biological and Biomedical Sciences) and a distinction from the University of Oxford in the Law and Practice of Intellectual Property. His work has been published in the Oxford Journal of Intellectual Property Law and Practice and in the European Intellectual Property Review. Additionally, he is one of few at the IP bar to have studied accounting, economics or finance, which he did while at Cambridge’s Judge Business School, where he was awarded first class honours in Management Studies.

Edward has worked on disputes in the Intellectual Property Enterprise Court, the High Court, the Court of Appeal and the European Court of Justice, as well as in the UKIPO and the EPO.   He also has experience of advising in relation to the validity and essentiality of Standard Essential Patents alongside technical experts, including review of working group submissions.

Edward maintains strong scientific interests outside of his legal work and is a member of an interdisciplinary group interested in the implementation and effect of the human right to scientific progress under Article 27 of the United Nation’s 1948 Universal Declaration of Human Rights / Article 15 of the International Covenant on Economic, Social and Cultural Rights.

You can read Edward’s blog on intellectual property law and procedure at cronan.co.uk.

Carku v NOCO [2022] EWHC 2034 (Pat): Edward represented Carku, successfully arguing that NOCO’s use of the Amazon IP complaints procedure gave rise to unjustified threats of patent infringement. This was the first High Court trial to consider this issue. Meade J held that the threats were unjustified because the patent was both invalid and not infringed.

Advanced Bionics v MED-EL [2022] EWHC 1345 (Pat) – Edward acted for Advanced Bionics in their successful bid to revoke a patent relating to an MRI-compatible medical device. Supply of replacement parts by Advanced Bionics was also held not to give rise to infringement under section 60(2). Led by Andrew Lykiardopoulos QC.

Neurim v Teva [2022] EWHC 954 (Pat) – Edward acted for Teva in successfully resisting an application by Neurim and Flynn Pharma for an interim injunction to restrain Teva’s dealing in its generic prolonged-release Melatonin pharmaceutical product. Led by Charlotte May QC.

Commscope v SOLiD Technologies [2022] EWHC 769 (Pat) – Edward acted for the successful defendant, SOLiD technologies, in this patent trial relating to digital DAS technologies for point to multipoint distribution of RF telecommunications over fibre optic cables. The patent in suit was revoked for reason of obviousness and anticipation.

Optis Cellular Technology Inc v Apple Retail UK Ltd [2021] EWHC 2694 (Pat) – Edward acted for Sisvel, and its CEO, Mr Mattia Fogliacco, in this hearing before Meade J which related to an alleged breach of confidence in a draft judgment in proceedings between Optis and Apple.

Nokia v Oppo, Oneplus and Realme – Edward acts for Nokia in the UK arm of this multi-jurisdiction FRAND and non-essential patent dispute. Edward was instructed to draft Nokia’s pleadings. As junior to Nicholas Saunders QC he obtained the first UK trial listing in decision [2021] EWHC 2746 (Pat).

Mitsubishi & Sisvel v Archos and others – Edward was instructed by the Claimants on the first technical trial in this multi-party FRAND dispute, which settled shortly before trial. Edward acted for the Claimants in both the technical and FRAND sides of the proceedings, for example in [2021] EWHC 889 (Pat).

Shenzen Carku Technology Co. v The NOCO Company [2020] EWHC 2104 (Pat) – Edward was junior to Hugo Cuddigan QC in this application for summary judgment and an interim declaration of non-infringement of a patent relating to circuit design in car battery jump-starters. The claim is due for trial in 2022.

TBD (Owen Holland) Limited v G2A Limited and others [2020] EWCA Civ 1182 – Edward acted for the Defendants in this landmark Court of Appeal decision regarding the execution of search orders covering digital materials, litigation privilege, and permission to bring committal proceedings.

Molavi v Hibbert and others [2020] EWHC 121 (Ch); [2020] 4 WLR 46; [2020] WLR(D) 58, Edward acted for the screenwriter Nigel McCrery in this case regarding copyright infringement and breach of confidence relating to the BBC drama Silent Witness.

Emtelle v Hexatronic, Edward acted for Emtelle in this case relating to two patents for inventions regarding blowable fibre optic cables. This case featured substantial infringement and validity experiments. It settled shortly before trial in early 2020.

Apple v Conversant, Edward was instructed on behalf of Apple in relation to a patent trial concerning the remote control functionality of OS X, now settled.

TBD v G2A Limited [2019] EWHC 2390 (Ch), a copyright and breach of confidence case in the aviation industry. Edward was junior to Nicholas Caddick QC in this hearing relating to conduct of a search order.

TQ Delta v ZyXEL, Edward acted on behalf of ZyXEL in these patent infringement proceedings in xDSL modem technologies. Edward also worked on the FRAND licence proceedings, which were the first in the English Courts to look at SEP licensing terms under the ITU RAND obligation, prior to their being vacated following the court of appeal’s judgment in [2019] EWCA Civ 1277.

Edward has also acted without a leader in the UKIPO and IPEC in proceedings including:

Liqwd Inc. v L’Oreal [2018] EWHC 1394 (Pat), patent infringement proceedings concerning a maleic acid additive for the prevention of damage to hair in bleaching, and [2018] EWHC 1845 (Pat) concerning the admissibility of evidence after trial.

Contributed to as a pupil:

PPL v Ellis [2018] EWCA Civ 2812, concerning the availability of additional damages for copyright infringement and the interaction of the CDPA 1988 with the IP Enforcement Directive.

Poul Chang v Bailcast [2018] EWHC 3432 (Ch), the first case to consider the interaction of the Community Designs Regulation and the related actions provisions of the Brussels I Regulation (recast) in the English Courts.

AMS Neve v Heritage Audio (C-172/18) This case in the CJEU related to online targeting and jurisdiction under the EU Trade Marks Regulation.

Rockwool v Knauf  (O/291/19) This revocation action against two patents took place in the UKIPO and raised issues in relation to enablement, obviousness, and the applicability of the law of plausibility to non-medical inventions.

He has professional indemnity insurance provided by the Bar Mutual Indemnity Fund (BMIF Ref: 2190/063). Please refer to the BMIF website for full details of the world-wide cover provided, and the BMIF’s contact details.

“Proving Patent Infringement to Evidence Sufficiency, and the Value of Declaratory Relief after a licensing relationship breaks down”; European Intellectual Property Review.

“Plausibility after Warner-Lambert v Actavis: Fantastic legal tests and where to find them”; Oxford Journal of Intellectual Property Law & Practice

“Patent Box: Incentivising UK Innovation; An industry report on the Patent Box initiative and its impact on UK innovation” in conjunction with Merks & Clerk and the Cambridge Design Partnership.