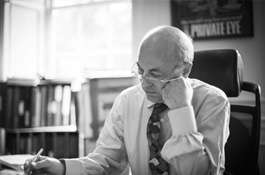 “He has the ear of the court and makes very inventive arguments.” Chambers & Partners 2019

“He is a brilliant asset with exceptional knowledge of everything IP-related. He is an unassuming, relaxed and calming influence, and he never gets flustered.” Chambers & Partners 2017

“An impressive performer in court, who stands out as one of the nicest silks at the IP Bar.” Legal 500 2017

“Responsive and accessible, with all the benefits of the extensive experience of a senior silk.” Legal 500 2016

Roger is a leading IP practitioner with wide ranging experience across the full range of trade marks, patents in all areas of technology, designs and information technology at all levels.  He regularly appears before the English courts and before the Court of Justice of the European Union.  He sits as a Deputy High Court Judge in the Chancery Division.  He also practises as a mediator in IP and commercial disputes.  Roger has a degree in Natural Science from Cambridge.

Chambers & Partners 2019 ​“Clients are always very pleased with what they get from him – a very authoritative view delivered in a simple manner. He is hugely reassuring, even when the news isn’t good.”

Chambers & Partners 2018 “He is very confident, brilliant on his feet and penetrating in his arguments.” “He is experienced, approachable, grasps the key issues and gives clear, incisive and commercial advice.”

Chambers & Partners 2017 “He is a brilliant asset with exceptional knowledge of everything IP-related. He is an unassuming, relaxed and calming influence, and he never gets flustered.”

Chambers & Partners 2016 “Excellent if you want someone with heavy firepower.”

Chambers & Partners 2013 “Roger is “client-friendly and very good on his feet,” according to sources, and is someone who “presents advice in a clear and uncomplicated way.” He is adept in the leading trade mark and passing-off cases of the day … as he is in high-value patent actions.”

Chambers & Partners 2012  “Roger Wyand QC is a popular silk who has the reputation of being a “proper QC – a commanding presence with all the desirable gravitas.” Commentators say he is “absolutely first-class in terms of getting into the detail and has superb client management skills.” They further appreciate the fact that he is “very straightforward and to the point, and doesn’t over-dramatise in court.””

Chambers & Partners 2011 Roger “is an astute, knowledgeable and commercial” lawyer who “understands his clients’ needs and gives realistic advice.” His “laid-back” but “switched-on” approach makes him “a pleasure to work with” and in court he impresses as “terrific on his feet”. A good all-rounder,” he is experienced in a wide range of IP litigation and recently appeared in L’Oreal v eBay and Interflora v Marks & Spencer, both of which were referred to the ECJ”

Legal 500 2020  “A creative legal thinker who has the ear of the court and puts clients at ease.”

Legal 500 2019  “He is a creative legal thinker who grasps the key issues and gives clear, incisive and commercial advice.”

Legal 500 2016 “Responsive and accessible, with all the benefits of the extensive experience of a senior silk.”

Legal 500 2011 Roger is “a superb advocate, who should be considered if you need someone to argue a difficult case.”

Curt G Joa Inc v Fameccanica Data SpA [2018] EWCA Civ 1786 – resisting an appeal from IPEC. The trial judge had revoked a patent on the grounds of added matter and lack of clarity. The appeal also involved issues of abuse of process arising from the central amendment made at the EPO following the IPEC trial.

Meter-Tech Llc & Anor. v British Gas Trading Ltd [2016] EWHC 2278 (Pat) – patent action concerning smart meters, where the Court held that a large scale use could be within the experimental use exception but had to relate to the subject matter of the invention.

Protomed v Medication Systems [2012] EWHC 3726 (Ch); [2013] EWCA Civ 1205 – unusual case where interim injunction was refused on the ground that the patentee had no arguable case.  Upheld on appeal.

Actavis v Novartis [2009] EWHC 41 (Ch) – revocation of a pharmaceutical patent for a sustained release formulation of a cholesterol lowering statin on the grounds of obviousness.

Actavis v Janssen [2008] EWHC 1422 (Pat) – revocation of an enantiomer patent for a hypertension treatment pharmaceutical patent on the grounds of prior publication.

Qual-Chem v Corus [2008] EWPCC 1; [2008] EWCA Civ 1177 – patent infringement action by a small company against the large steelmaker for an invention in respect of an improvement in the process of steel purification.

Ultraframe v Eurocell [2006] EWHC 1344 – one of the few patent damages inquiries to go to full trial, deciding a range of important issues on the recovery of different heads of damage.

Kavanagh Balloons v Cameron Balloons [2004] RPC 87 – Patents County Court case relating to whether the flight of a hot air balloon in a field was a making available to the public and the level of proof required to prove prior use in such circumstances. Went to the Court of Appeal on costs [2004] FSR 698.

Peter Davies v Wolverhampton Wanderers Football Club (1986) Limited Claim to be the owner of the copyright in the football club’s logo.  Club unable to establish the designer of its logo.  Following publicity of the clubs application to strike out the claim on account of undue delay in bringing the action, the designer responsible for the club’s logo came forward to give evidence so the case is going to trial.

Phonographic Performance Limited v South Tyneside Metropolitan Borough Council [2001] EMLR 17 – a case on whether a local authority could claim to be a ‘club society or other organisation’ whose main objects were charitable and thus claim exemption to copyright infringement by way of playing sound recordings in public.

Consolidated Developments v Mr A A Cooper (Tin Pan Alley TM) [2018] EWHC 1727 (Ch) Further evidence can be allowed on appeal but only in exceptional circumstances.  It is possible to appeal against a decision in the UKIPO where no criticism is made of the decision but it is submitted that if the Hearing Officer had had the new evidence sought to be admitted, the decision would have been different.

Property Renaissance Ltd T/A Titanic Spa v Stanley Dock Hotel Ltd T/A Titanic Hotel Liverpool and Ors. [2016] EWHC 3103 (Ch) – trade mark dispute for invalidity including the principle of own name defence involving an appeal from the UKIPO against a ruling that late evidence should not be admitted, an IPEC trade mark infringement case and a High Court trade mark infringement case.  The judgment considered the comparison between the registered trade marks TITANIC SPA, TITANIC QUARTER and the sign TITANIC HOTEL.  Held that TITANIC HOTEL infringed TITANIC SPA which was not too similar to TITANIC QUARTER.  It also considered the own name defence.a trade mark dispute for infringement and invalidity including the principle of own name defence.

Gama Healthcare Ltd v. PAL International Ltd [2016] EWHC 75 (IPEC) – a passing off case based on the get up of the packaging.

Jack Wills Ltd v House of Fraser (Stores) Ltd [2014] EWHC 110 (Ch) – represented the successful claimant with Andrew Norris in a trade mark infringement and passing off claim relating to the Jack Wills pheasant logo. The issues included the role of intention in establishing unfair advantage, identity of the average consumer and the need for positive evidence of an impact on the economic activity of the defendant’s goods. See also: Hogarth Chambers News: Jack Wills Pheasant Rules the Roost .

Boxing Brands Ltd v Sports Direct International Plc and others [2014] EWHC 91 – a further hearing on the scope of the claimant’s trade mark rights and whether there should be an inquiry on the cross undertaking in damages given by the claimant in support of its interim relief.

Diageo v ICB [2010] EWHC 17 (Ch); [2010] EWCA Civ 920 – the latest in the line of extended passing off cases considering the protectability of ‘vodka’ as the designation of an alcoholic drink and whether the use of the trade mark VODKAT, in respect of a drink that could not be described as vodka, resulted in that drink being passed off as vodka.

Daimler v Sany [2009] EWHC 2581 (Ch) – an action for the infringement of the Daimler trade mark registrations for the three-pointed star device by the use of a device consisting of three numeral “1”s arranged in a similar orientation but with a gap at the centre and with the tops of the numbers extending outside the circle. Consideration of the requirements for taking an unfair advantage and the proof of use required to resist a non-use attack.

L’Oreal v Bellure [2006] EWHC 1503 (Ch); [2006] EWHC 2355 (Ch); [2007] EWCA Civ 968; C-487/07 (ECJ) – The leading case on infringement of registered trade marks by taking unfair advantage of the reputation of the registered trade mark. Also important for consideration of infringement by the publishing of a comparison table indicating which of the Defendants’ “smell alike” perfumes smell like the Claimants’ famous brands of perfumes. Still to return to the Court of Appeal for a ruling as to the effect of the ECJ answers to the questions referred to it by the Court of Appeal.

Philips v Remington [2006] EWCA Civ 16 – the latest stage of the long running battle over the trade mark consisting of a picture of a Philips’ three headed shaver. The ECJ had already ruled in earlier proceedings between the same parties as to the meaning of the shape exclusion provisions in the Trade Marks Directive.

Arsenal v Reed [2003] RPC 39 – a case involving the interpretation of the Trade Marks Directive in respect of the nature of the use of the mark by a market trader that can be prevented by the trade mark proprietor. Market trader selling scarves and other memorabilia with ARSENAL and other insignia belonging to Arsenal Football Club on them.

Authorised to sit as an Enterprise Judge in the Intellectual Property and Enterprise Court and the Registered Designs Appeal Tribunal.

Associate member of ITMA and CIPA.

Member of the International Bar Association, Officer of the IP Law and Entertainment Law Committee of the IBA

He has professional indemnity insurance provided by the Bar Mutual Indemnity Fund (BMIF Ref: 2190/032). Please refer to the BMIF website for full details of the world-wide cover provided, and the BMIF’s contact details.

Deputy High Court Judge of the Chancery Division Authorised to sit in the Intellectual Property Enterprise Court and the Registered Designs Appeal Tribunal.

Roger frequently gives talks to various organisations, including the IBA, ITMA and commercial conference organisers on a variety of intellectual property subjects.

Roger is a keen photographer and an Arsenal season ticket holder.