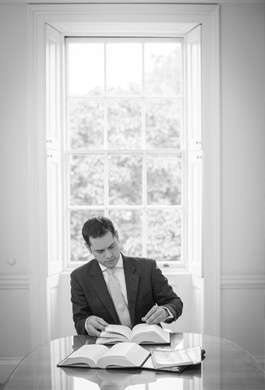 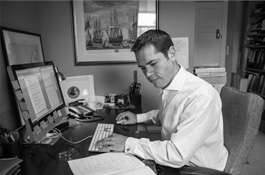 “He is clear and succinct in his arguments and goes straight to the heart of the matter.” Chambers & Partners 2020

“Consistently excellent. His advice is brilliant, he’s incredibly practical and I have never worked with counsel whom I would be more happy to introduce to clients.”  Chambers & Partners 2019

“He is a real talent whose experience, advice and approach are far beyond his years.”  “He is a very focused and clever barrister, and is extremely good to work with.”  Chambers & Partners 2017

“Extremely personable, with a calm and authoritative manner.”  Legal 500 2016.

After finishing a mathematics degree at Pembroke College, Oxford, Ben spent seven years as a senior subeditor and contributor at New Scientist magazine. His wide experience of all areas of science, from the quantum to the cosmological, provided a great springboard for a move to the IP Bar.

Ben practises in all fields of intellectual property. His mathematical background is particularly applicable to highly technical subject matter such as electronics and telecoms patents. He has appeared in the Court of Appeal and CJEU, and regularly represents clients in the High Court, including the Intellectual Property Enterprise Court, as well as at the UKIPO at first instance and on appeals.

Chambers & Partners 2020
Intellectual Property: “I rate him very highly as he is a thoughtful lawyer and is very useful to have on the team.”

Chambers & Partners 2019
​Intellectual Property:  “Consistently excellent. His advice is brilliant, he’s incredibly practical and I have never worked with counsel whom I would be more happy to introduce to clients.”

Chambers & Partners 2018
Intellectual Property:  “He is very hard-working, diligent and works well with solicitors.”  “He is extremely good with clients.”

Chambers & Partners 2017
Intellectual Property: “He is a real talent whose experience, advice and approach are far beyond his years.” “He is a very focused and clever barrister, and is extremely good to work with.”

Chambers & Partners 2014
Intellectual Property: “A highly rated junior of four years’ call who is already gaining attention among top IP solicitors as a skilful barrister, who is particularly adept at complicated patent disputes. He quickly gets to grips with complex technical patent cases. He is a real team player and a joy to work with.”

Legal 500 2021
Intellectual Property:  “A talented junior with whom it is a pleasure to work with.”

World Trade Mark Review 2017
“often on the frontlines of complex patent cases, he is also a frequent flier in trade mark contentions.”

Ben’s legal experience includes major patent litigation, as well as actions in trade marks, passing off, copyright, design right, domain names, confidential information and comparative advertising. He has appeared as a junior in the Court of Appeal for HTC in HTC v Gemalto and for Huawei in Unwired Planet v Huawei & ors, and has acted as a junior in many High Court patent trials, most recently in PulseOn v Garmin as junior counsel for Garmin. He has appeared at the General Court in Luxembourg, and has conducted various trials on his own in the Intellectual Property Enterprise Court (formerly the Patents County Court).

As part of his early work, Ben spent seven months on secondment to a major firm of patent litigation solicitors. This has given him invaluable knowledge and insight into the litigation process, including case strategy and the instruction and handling of expert witnesses.

Ben is co-author of A User’s Guide to Trade Marks & Passing Off  (along with Hogarth’s Nicholas Caddick QC). His other publication credits include co-editing the intellectual property chapter of Clerk & Lindsell on Torts, co-editing Copinger & Skone James on Copyright, and extensive research on Moral Rights.

In 2012 Ben was the UK’s National Rapporteur to the International League of Competition Law (LIDC).

Schenck Rotec v Universal Balancing [2012] EWHC 1920 (Pat) – Trial of validity and infringement of a patent about balancing prop shafts and other axles and rotors.

Ningbo Beifa v Schwan-Stabilo – Revocation action relating to Community registered designs in highlighter pens. Advised and helped prepare second appeal to the General Court of the CJEU, following that Court’s earlier judgment and the subsequent reappraisal by the Boards of Appeal of OHIM.

Property Renaissance Ltd T/A Titanic Spa v Stanley Dock Hotel Ltd T/A Titanic Hotel Liverpool and Ors. [2016] EWHC 3103 (Ch) – Trade mark dispute for invalidity including the principle of own name defence involving an appeal from the UKIPO against a ruling that late evidence should not be admitted, an IPEC trade mark infringement case and a High Court trade mark infringement case.  The judgment considered the comparison between the registered trade marks TITANIC SPA, TITANIC QUARTER and the sign TITANIC HOTEL.  Held that TITANIC HOTEL infringed TITANIC SPA which was not too similar to TITANIC QUARTER.  It also considered the own-name defence.

Vince v EUIPO [2016] EUECJ T-315/15 – Appeal to the General Court of the European Court of Justice in relation to the refusal to register the mark ELECTRONIC HIGWAY.

PLYMOUTH LIFE CENTRE trade mark O/236/13 – Appeal to the Appointed Person over the use of the disputed mark in relation to sports facilities.

PORTMEIRION trade mark O/342/12 – Acted for Portmeirion Limited and the Trustees of Ymddiriedolaeth Clough Williams-Ellis Foundation in a dispute over an application to register the word PORTMEIRION in relation to certain services.

GURU JOSH PROJECT trade mark O/308/12 – Acted for DJ Guru Josh in a successful appeal before the Appointed Person, involving allegations of bad faith against a former business partner who registered the mark in question.

Slater v Wimmer [2012] EWPCC 7 – Trial in the Patents County Court, acting for defendant who was being sued for copyright infringement. Issues included implied terms as to equitable ownership in commissioned works.

Casey v Talkback Thames – Acted for the defendant television production company, obtaining summary judgment against claimant who was suing for copyright infringement relating to the format of a sitcom.

AI Claims Solutions v Plusnet – Obtained a Norwich Pharmacal order for disclosure of the name of a broadband subscriber suspected of sending malicious and harassing emails.

Ben was also involved in a number of significant cases during his pupillage, including:

He has professional indemnity insurance provided by the Bar Mutual Indemnity Fund (BMIF Ref: 2190/056). Please refer to the BMIF website for full details of the world-wide cover provided, and the BMIF’s contact details.